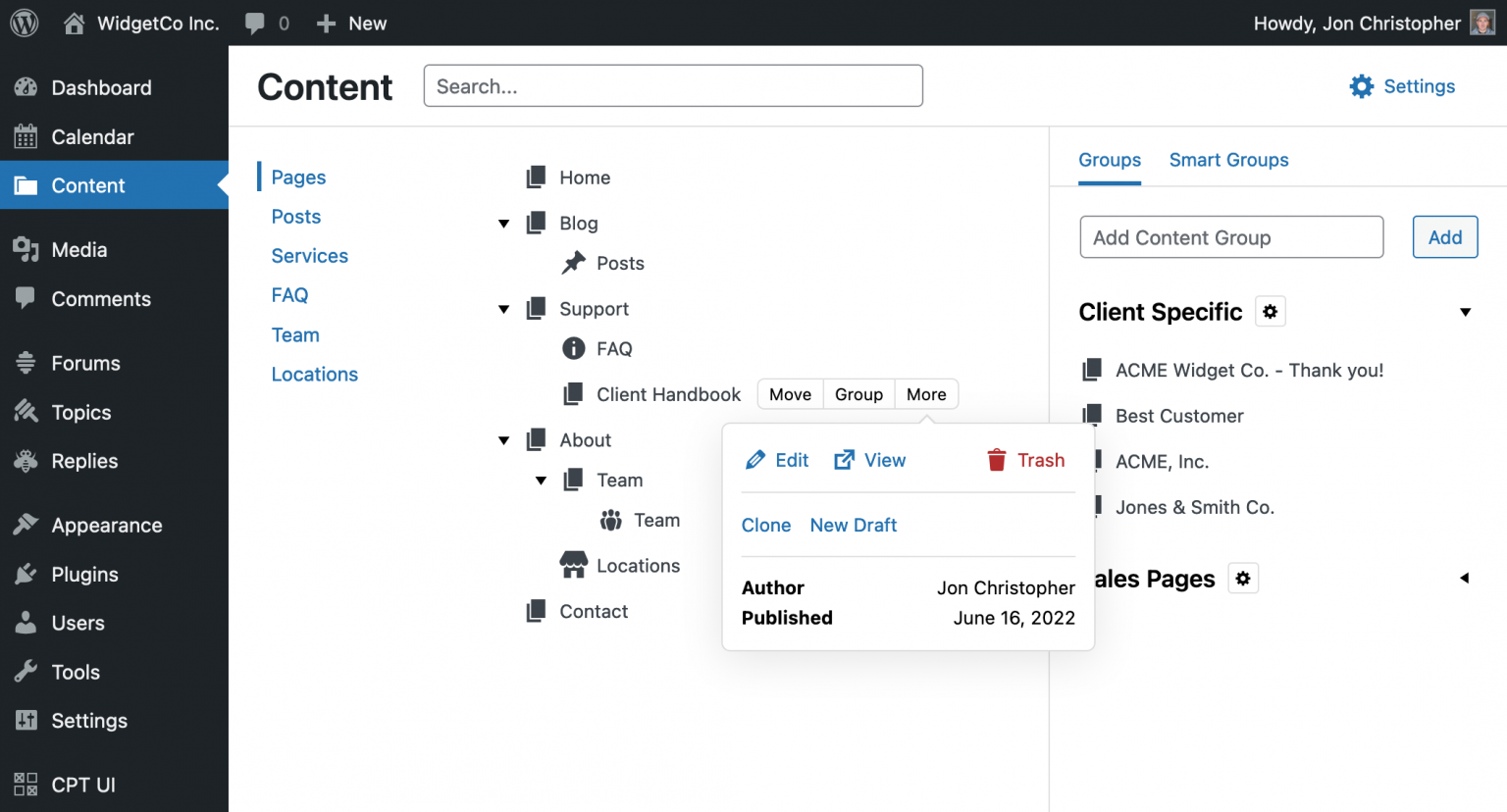 WordPress developer Jon Christopher has relaunched OrganizeWP, a commercial plugin that organizes content in the admin with a single, unified view and UI for streamlining common actions. It’s a utility plugin that Christopher has had on his mind since before he released its predecessor, the Hierarchy plugin, eight years ago.

“The WordPress Admin felt really disjointed once Custom Post Types were a new thing (this is how long ago we’re talking) because there were top level content ‘buckets’ mixed and matched with Plugins and Settings and everything else,” Christopher said. “Then products started using the Admin Menu as a form of advertising to an extent, putting top level Menu items in place when they absolutely aren’t necessary, and the problem just got worse and worse.”

Christopher aimed to tackle this same problem with OrganizeWP but redesigned the UI and rebuilt it with JavaScript to accommodate new features like groups and drag and drop. The new product is now out of beta and is catching some attention due to its unusual pricing model.

For $29.00, users get access to updates and support for Version 2. OrganizeWP is selling licenses for the current major version with no subscription.

In a post titled Rethinking WordPress Product Pricing Models, Christopher highlights the drawbacks of using the subscription model, which is used widely in the WordPress ecosystem for software products that users host on their own websites.

“Support, I would argue, is by far the reason so many WordPress products have adopted a subscription-based pricing model,” Christopher said. “The support burden for products in the WordPress space is hugely significant. It goes hand-in-hand with the self-sufficiency that comes with WordPress.

Since OrganizeWP is an admin-facing tool with no frontend output, Christopher decided it was “a prime candidate for a more old school software pricing model in that licenses will be sold for each major version, with no automatic expiration.” He plans to support version 2 of OrganizeWP indefinitely in terms of compatibility with WordPress and bug fixes.

“With heavily committing to major versions being the big planning milestones, updates will involve (primarily) bug fixes when applicable as opposed to adding new features,” he said. “Each major version will be feature frozen, so the updates will look a bit different when compared to most WordPress products today.”

Christopher identified subscription fatigue as the inspiration for this pricing model experiment. One might be hard pressed to build any type of business website on WordPress without purchasing any subscriptions for plugins. Users are so inundated with subscriptions that MasterWP was inspired to create WP Wallet, a service that helps users keep track of license renewals and helps agencies bill for client subscriptions.

Fellow veteran product creator Brian Gardner called OrganizeWP’s pricing model “a bold (and refreshing) move,” but it’s the market that will decide if it is successful. Will customers be grateful for purchasing the plugin as a one-time payment or will they expect a constant stream of new features for the price?

“The market may say that WordPress product customers have come to know, expect, and be comfortable with the subscription model,” Christopher said. “Selling major versions means that updates will be nothing more than maintenance releases and bug fixes, no new features.

“New major versions will need to be pitched to existing customers and that feeling of getting features ‘for free’ is gone with this pricing model. Customers may hate that, I’m not sure yet.”